5 Tips and on Choosing a Script Analyst — Warning You Could Choose One Who Knows Less Than You!

Do you “Loop” Like I Do On Your Rewriting?

Most writers realize that when they finish their screenplay, at some point, they will need to get a script analysis / consultation. There are probably thousands of people who are offering to do this, from college screenwriting teachers and out-of-work producers, to other aspiring screenwriters, and career script consultants.

I won’t suggest that you have to go only with a professional script analyst, but the fact is that if you go with a pro who has been proven, your odds of getting valuable feedback are much higher than taking a big risk with someone who is unproven.

They might see a problem in your script, which is accurate, but oftentimes, the difference between a real pro and someone who is making a little money on the side consulting is that the pro is far more likely to know the source of any problems in your script.

WARNING! The danger of going with someone who doesn’t know what they’re doing – even though they are cheap – is that you risk being told things that will make your script worse if they are not at the real root of the problem in your script.

Usually the source of the problem in your script is deeper than it seems on the surface.

The real pro should be able to tell you how to fix the problems and also really be at the root of the problem.  For that matter, even some pros make suggestions that sound good but don’t get to the real root of the problem, and therefore in the end, your script still has problems.

An example is, let’s say that your ending feels like it’s dragging out. It might seem that you just need to cut some pages out and make it shorter.  That might help  but it’s not enough.  More likely, the root of the problem is that you have not set up high enough stakes to build the momentum, so you need to work on that, too. That’s the kind of distinction that I look for – and I’m assuming other top pro analysts do! 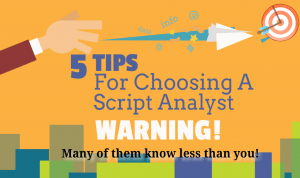 Anyway, here are 5 Tips For choosing A Script Analyst who is right for you and your script:

1. Choose a script consultant who specializes in the form you are working in.

Although a story is a story, it is told in different ways depending on whether it’s a movie, a novel, a one-hour drama or a stageplay.

When you’re paying for feedback, be sure you get correct feedback for that form — whether it is a feature-length screenplay, a sitcom, a documentary, or a one-hour drama.  Each has very specific requirements and your analyst needs to know what they are.

2. Find a script doctor whose style you resonate with.

Speak to the script consultant or look at their website and ask yourself, “Does it feel or sound to you like you could connect with the way they give feedback?  What approach do they use to the critique?”

For instance, I first focus on the fundamental building blocks of plot, theme, and character arc and the integration of them. I will also work with you in the style of the late, beloved teacher Blake Snyder and his book “Save the Cat” beats because so many screenwriters have told me how his explanations opened things up for them.

When you are ready to choose, find out what approach that particular script analyst uses and see if it feels right to you, even though you may not be 100% clear about what it will be like.

3. Decide if you want a written or oral critique and find someone who offers feedback in the form you want.

You and every other screenwriter has a way that they feel is best for them to get feedback in. Determine whether you prefer verbal feedback or written. If you want verbal feedback, find out whether there is an option to get it recorded.

Verbal feedback is also nice in that you can interact and engage more in the discussion.

Some writers also prefer written feedback so they can review it as much as they want. If you prefer written, see if you will have an opportunity to ask any questions you have about the feedback.

4. Find a service that is within your budget and take into account the cost of follow-up script reviews.

Your script will ultimately go through many iterations and rewrites. If you’re serious about writing a great screenplay, then it’s critical to prepare your mindset for the fact that it can take 5 to 10 to 20 or more rewrites to get it into great shape.

When you search out an analyst, consider not only the initial fee, which could be anywhere from $100 to $5,000 or even $10,000, but consider the fees for follow-up reviews as well. Find one who you can go back to for one or more follow-ups at a discounted price.

(My critiques/coverage range from about $250 for a couple of pages of bullet point notes to $325 for a one-hour critique and on up to $1500 for a Master Critique – with the One-Hour Critique, Development Notes, and Development Critique being the most popular.)

5. Work with a professional who has not only read but critiqued lots of scripts in depth.

You can get feedback from your fellow aspiring screenwriters and it can help some, but ultimately, you will find that most non-pro people who read your script will project their own stories and ideas onto your story, rather than help you develop your particular story.

Additionally, as mentioned above, many people who give feedback don’t recommend how to fix the problems they see, and if they do, they are often superficial fixes rather than getting to the real root of the problem in the story.

Your best bet is to work with a proven script analysis professional who offers feedback in the way you like, tells you not only what is wrong with your script, but gets to the root of the problem and tells you how to fix it, and has a reasonably priced follow-up review system.

So there you have it! I hope you find these guidelines helpfu.  When you’re ready for a script analysis, be sure to choose one that’s right for you.

Feel free to ask questions or make comments below.  Thanks for stopping by.