The Actor’s Valuable Asset that you usually miss out on

I doubt that you’ll be surprised if I tell you that your long-term success in Hollywood depends on you making contacts  with  industry people, staying in touch, and building a professional relationship over time.

Yet I hear so little of actors actually, really doing this correctly.  They know they need to, but it just kind of hangs out there, like they’ll eventually get to it.  And if you think about it, there really is no other way to do it — if talent agents, personal managers, producers, directors, and or casting directors don’t know you, they can’t cast you in their projects. So you have to get to know them and work on building that relationship.

You might then wonder, “How do I get to know them? I don’t know anyone!”  And if you asked that, I would tell you, you’ve come to the right place…. because I’m going to help you with that.

The great news (if you live in Los Angeles) is that networking events are happening around town daily. and you just have to find out what, when and where they are.  You can start with events put on by SAG-AFTRA. The actor’s union has events for their members to meet industry people and hear them speak. Even if the event is too large to get to meet the person at that time, you can follow up with them later by other means to introduce yourself.

There are several places where you can sign up for free film screenings, prior to the film coming out, and oftentimes the filmmakers will be there.  That’s one more opportunity to meet working filmmakers who are on their way up.

If you listen around, you’ll find tons of opportunities to start networking and building connections and you really need to go to them if you want to build your connections.

These are just a couple of the very simple ways to get started on your networking and building connections.  There are lots more, I just wanted to get your wheels turning. But as I noted above networking and meeting people will only get you so far.  You must have a way 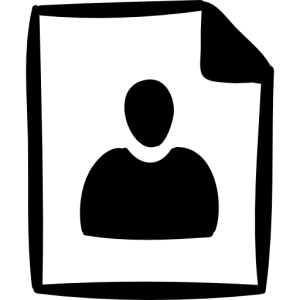 to maintain the contacts that you make, because ultimately, you need to build a relationship of sorts with that person over time.

So the next thing you have to do is to collect their information and record it.  After that, of course, you need to keep in touch and build that connection, but let’s not get ahead of ourselves.

To get your data collection in place, you can use an electronic address book or even a paper system to track everyone you meet.  I recommend that initially you capture all of their info by writing it all down. In fact, if you have lots of contacts whom you’ve met over time or auditions you’ve done, then gather than info… And write each contact on a sheet of paper by itself — one name per sheet, and write everything you know about them.  After a while, you can put it all into a custom database of some sort, but start by collecting it all.

Once you have all your info, then you need to decide how you will track them.  A very important requirement is that you will need to be able to retrieve your information easily, readily, and en masse.  Because of this, I don’t recommend simply storing these names and contacts in your iPhone or Samsung phone. You need to have a much stronger access to groups of them at once so you can send mailings or emails to.

Then it’s just a matter of staying in touch with them =- enough so that they remember who you are –although not so much that they wish they’d never met you to begin with.

To jump in to it the simplest way possible, make a note of where the audition or networking event was, the casting director’s name, how you did, whether you got a callback, what type of role it was, and anything else you can think of. This is critical for building your contacts.  Just write everything down relative to that audition or event. One of the things I do is take a picture of the person when I’m there with them, if possible. And after the events, I take pictures of their business cards and put them on my computer.

Record as much info as possible on each of your auditions so you can build contacts, but also note observations about how you did.  The idea is to learn also about your own process so you can create conditions to deliver your best auditions… such as “I arrived 15 minutes early and I was so stressed waiting around, I think it’s better to wait in the car until 6 or 7 minutes before my call time.”

As you get your contact system in place and bring consciousness to the whole process, you can also begin thinking about how to enhance those relationships.  There is a whole art to doing that and I cover that art elsewhere, so I’m not going to do it here, but hopefully these points will kick you off with a powerful launch.

The key point I want to bring home is that, on one hand, you know it’s important to know people and to network, but on the other hand, most actors are not even close to utilizing this asset they way they could.

In Hollywood, your most valuable and least valued asset is the connections you are building…even early on in the “moving up the ladder” stage. In my estimation, less than 1% of actors a sufficient contact follow-up system in place, so you’re leaving money right there on the table.

To build your contact equity, put a strong, reliable system in place, then nurture your relationship with them.

If you realize how valuable doing this could be, and you want coaching on the best way to set your system up, then schedule a coaching time and I’ll work with you to determine your best method. All you have to do is register for a coaching session and I’ll give you guidance on taking advantage of your most valuable and least valued asset.

Otherwise, if you already have your system in place, and you’re ready to get an agent or manager, then take a look at these services through which we can help you find representation. Meanwhile, keep looking for and taking the next most powerful step you can take in your career.