Planning for Success in Screenwriting: Actions (Part 2 of 2)

As I covered in Part 1 of Success in Screenwriting, there are two types of goals:

1.  Results Goals:  These are the final results you want to produce, such as getting screenwriting jobs and ultimately getting your script optioned or sold.  These results involve others making decisions.

2.  Key Indicators:  These are the actions you take to produce the results you want, ones which you have control over and can do on your own.

To reach your goals, you need to figure out what actions you can do that would “indicate” that you are on track. Big goals always involve other people, and we know how frustrating it can be when they simply won’t do what we want them to.

I mean… wouldn’t it be nice if all the people you want to read your script would Just Do It?  Yes, it would!  But that’s not how things work, as we know, so we need to make a plan and take lots of action.

While it’s true that you can’t make others do anything, the good thing is you don’t have to.  The idea is that you take enough of the appropriate kinds of actions that you CAN do on your own that the odds of someone else taking the action you want goes way up — such as read your script to consider for production and so forth.

Your actions help you move toward producing the results.

Some of those actions are to make sure your script is as good as it can possibly be. You can reach out to the right producers — lots of them.

Think of it like a baseball player… he cannot make himself hit a homerun, but there are many actions he can take to increase his chances if that’s his goal. Lots and lots of batting practice, working with a batting coach.  And he also has to make sure he can run fast in case the ball lands deep in the outfield! If he doesn’t hit a homerun, there are still other things he has to be able to do.

We previously looked at the big picture of setting your long-term Results Goals.  We also learned that the right actions to take are your Key Indicators  in producing results.

Now we’re ready to look at the actions. What are the best actions you can take to produce the results you want?

Here are 10 possible project-oriented marketing actions that you can take to help you be successful.

If you want to sell a screenplay, you have to let producers know about it.  Creating a query letter mailing and sending it to a targeted list of producers is a great way to introduce your work.

Every year in Hollywood, there are a variety of pitching events for screenwriters.  At those events, you have an opportunity to meet live with Hollywood executives and pitch to them.  It can be a great way to make that first connection with someone whom you can later follow up with.

From the comfort of your own home, you can email producers you think might be a good match for your script.

If you don’t know who would be a good fit, you might use the custom research by Smart Girls. In that service, you will get as many emails as we can find for the producers we think could be a good match for your script.

4.  Cold call and pitch to the executives on the phone.

This is one of the more challenging ways to try to get your script read, but if you are great on the phone, then this is a viable method of contact.

5. Reach out to literary agents for screenwriters.

To have a long-term career, you will ultimately need to have a literary agent represent you at some point, but it’s a long shot at first.  However, you can send to them for that long shot! If by chance the agent reads your script and believes in you, it could set your career on the fast track.

6.  Attend networking breakfasts and luncheons and focus on building relationships.

You’ve probably heard the saying, “You have to know someone in Hollywood to make it,” and I would agree with that. But what they don’t tell you is that you can “Get to know people in Hollywood.”

Networking is very important. I encourage everyone in the industry to attend events like the HollywoodNetworkingBreakfast.com or Women in Film regularly.  When you attend the same networking events over time, you begin to establish a relationship with the people who attend.  If they get a sense that you are a serious writer, then they may consider reading your script and who knows what might be possible from there.

7.  Get a literary manager.

In the past few decade, literary managers have gained power.  You can have both a literary agent and manager to promote your work.

8.  Attend film festivals and network with other filmmakers.

9.  Do a table read of your screenplay.

One of the ways to see how your screenplay is progressing is to have a table read.  Cast good local actors to do the reading if possible.  You can even invite an audience.  This shows you are serious and it’s also a good way to see how your work comes to life.

One of the main rewards that contests often offer is “access.”  They often reward the winner with passing it on as a “Recommended” screenplay to execs.  Enter these, and if you win, you might get your script read by a Hollywood big shot who could so something with it.

Summary of Part 2 – Planning for Success in Screenwriting

When it comes down to it, you can’t make someone read your script or like it, just like you can’t make someone give you money, so when you set goals that require that, you need to work backwards on your milestones and identify the key indicators that would increase the likelihood of you getting someone to take the action.

When you have large goals like selling your screenplay, you need to take a lot of actions.  On one hand it seems like you just write the script, make sure it’s good, then try to get a producer to read it and you sell it and they make it!  Yes, on one hand, it may sound simple.

But the truth is that each of those steps involves many milestones on the pathway to getting your script made. I’ve listed 10 possible actions you can take on your own to move things forward.  So now, the question is what is your plan? And what actions will you begin to take to move it forward on a regular basis?

Start with your goal and then break it down and work backwards.

If you want help with this and you feel like you could benefit from guidance and coaching in doing this, you may find my newest program Big Juicy Project a great match. It’s called the Big Juicy Project because you need to be excited about something to get into this program and it involves a few things, namely one-on-one coaching with me and accountability for you following through.

I explain it all in detail here, so check it out!

If you missed Part 1 or want to review it, check it out here.

My hope is that these two articles have helped you put the reins on your career back in your hands. Let me know if I can help! 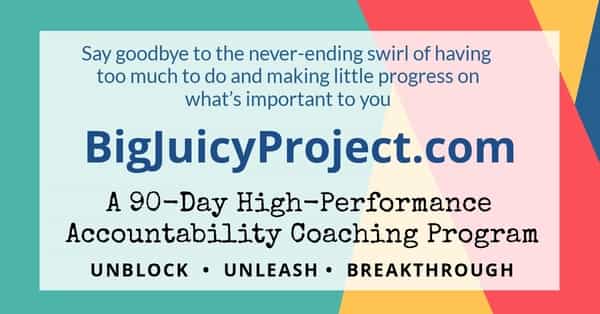 “What is your next quarterly goal?”